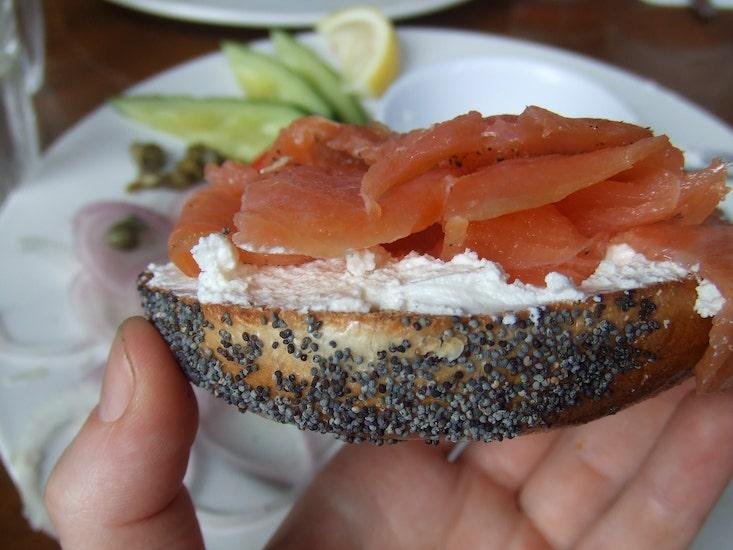 One of my favorite words is lox,” says Gregory Guy, a professor of linguistics at New York University. There is hardly a more quintessential New York food than a lox bagel—a century-old popular appetizing store, Russ & Daughters, calls it “The Classic.” But Guy, who has lived in the city for the past 17 years, is passionate about lox for a different reason. “The pronunciation in the Proto-Indo-European was probably ‘lox,’ and that’s exactly how it is pronounced in modern English,” he says. “Then, it meant salmon, and now it specifically means ‘smoked salmon.’ It’s really cool that that word hasn’t changed its pronunciation at all in 8,000 years and still refers to a particular fish.”

How scholars have traced the word’s pronunciation over thousands of years is also really cool. The story goes back to Thomas Young, also known as “The Last Person Who Knew Everything.” The 18th-century British polymath came up with the wave theory of light, first described astigmatism, and played a key role in deciphering the Rosetta Stone. Like some people before him, Young noticed eerie similarities between Indic and European languages. He went further, analyzing 400 languages spread across continents and millennia and proved that the overlap between some of them was too extensive to be an accident. A single coincidence meant nothing, but each additional one increased the chance of an underlying connection. In 1813, Young declared that all those languages belong to one family. He named it “Indo-European.”

Today, roughly half the world’s population speaks an Indo-European language. That family includes 440 languages spoken across the globe, including English. The word yoga, for example, which comes from Sanskrit, the language of ancient India, is a distant relative of the English word yoke. The nature of this relationship puzzled historical linguists for two centuries.

In modern English, well over half of all words are borrowed from other languages. To trace how language changes over time, linguists developed an ingenious toolkit. “Some parts of vocabulary are more stable and don’t change as much. The linguistic term [for these words] is ‘a core vocabulary.’ These are numbers, colors, family relations like ‘mother,’ ‘father,’ ‘sister,’ ‘brother,’ and basic verbs like ‘walk’ and ‘see,’ says Guy. “If you look at words of that sort in different languages, it becomes fairly clear which ones are related and which ones are not. For example, take the English word for number two, which is dva in Russian and deux in French, or the word night, which is nacht in German and noch in Russian.”

“The sounds that change across time are unpredictable, and differ from language to language, and some may not happen to change at all.”

Analyzing the patterns of change that words undergo, moving from one language to another, showed how to unwind these changes and identify the possible originals. “Reconstructed vocabulary of Indo-European is based on a comparison of descendant languages,” explains Guy. “You collect words that mean more or less the same thing in all the languages, and if they look like each other in terms of their pronunciation, then it’s a good candidate for a descendant from a common ancestor.” The English word honey is madhu in Sanskrit and myod in Russian. Sanskrit and Russian haven’t shared a common ancestor since Indo-European, so these words had to come from the same source. (There are also the words mead in English, met in German and mjød in Danish that refer to an alcoholic drink made from honey.)

After discovering a word that might have existed in the Indo-European, linguists compared how its pronunciations changed from language to language. For example, sound [k] changes to [h] from Latin to Germanic, and the Latin word casa transforms into the English house while the French word cœur transforms into the English heart. With hints like that, linguists could undo the sound changes and trace the original pronunciation. In several thousand years, most words change beyond recognition, like the word wheel, which initially might have sounded “kʷékʷlos.” But there were some remarkable exceptions—like the timeless lox.

The family tree of the Indo-European languages sprawls across Eurasia, including such different species as English and Tocharian B, an extinct language once spoken on the territory of Xinjiang in modern China. In Tocharian B, the word for “fish/salmon” is laks, similar to German lachs, and Icelandic lax—the only ancestor all these languages share is the Proto-Indo-European. In Russian, Czech, Croatian, Macedonian, and Latvian, the [k] sound changed to [s,] resulting in the word losos.

This kind of millennia-long semantic consistency also appears in other words. For example, the Indo-European porkos, similar to modern English pork, meant a young pig. “What is interesting about the word lox is that it simply happened to consist of sounds that didn’t undergo changes in English and several other daughter languages descended from Proto-Indo-European,” says Guy. “The sounds that change across time are unpredictable, and differ from language to language, and some may not happen to change at all.”

The word lox was one of the clues that eventually led linguists to discover who the Proto-Indo-Europeans were, and where they lived. The fact that those distantly related Indo-European languages had almost the same pronunciation of a single word meant that the word—and the concept behind it—had most likely existed in the Proto-Indo-European language. “If they had a word for it, they must have lived in a place where there was salmon,” explains Guy. “Salmon is a fish that lives in the ocean, reproduces in fresh water and swims up to rivers to lay eggs and mate. There are only a few places on the planet where that happens.”

In reconstructed Indo-European, there were words for bear, honey, oak tree, and snow, and, which is also important, no words for palm tree, elephant, lion, or zebra. Based on evidence like that, linguists reconstructed what their homeland was. The only possible geographic location turned out to be in a narrow band between Eastern Europe and the Black Sea where animals, trees, and insects matched the ancient Indo-European words.

In the 1950s, archaeological discoveries backed up this theory with remnants of an ancient culture that existed in that region from 6,000 to 8,000 years ago. Those people used to build kurgans, burial mountains, that archaeologists excavated to study cultural remains. In that process, scholars not only learned more about the Proto-Indo-Europeans but also why they were able to migrate across Europe and Asia.

In turned out that, in the past, the grassy plains of steppe that run from Western China to the Black Sea had large herds of wild horses. Early humans hunted them for food, but the Proto-Indo-Europeans were probably the first people who domesticated the ancestors of modern-day domestic horses. That brought them an enormous advantage, allowing them to move a lot faster than any other human group. Then, they adopted—or, less likely, invented—wheeled vehicles and attached these to horses. “That’s probably the moment when they suddenly managed to expand into the Middle East, into India, and across Europe,” says Guy. “Within the next thousands of years, they expanded like no other human group that we know about in history. Because [now] they had mobility, which nobody else had.”

In his book The Power of Babel, Columbia University linguist John McWhorter wrote, “Everything about a language is eternally and inherently changeable, not just the slang and the occasional cultural destination, but the very sound and meaning of basic words, and the word order and grammar.” It’s nice to know, though, that some words never change—lox being one of the most surprising.