It was the spring of 1862, and Robert Smalls—a 23-year-old enslaved man living in Charleston, South Carolina—was desperate to buy the freedom of his wife and children. The asking price was $800.

He had money saved up. Since the age of 12, Smalls had worked odd jobs in Charleston: lamplighter, rigger, waiter, stevedore foreman. At around age 15, he had found work on the city’s docks and joined the crew of the ship CSS Planter. For every $15 he earned, Smalls was allowed to keep $1. The rest of the money went to his owner.

Smalls tried earning extra cash on the side, buying candy and tobacco and reselling it at a higher price. But it was hardly enough. When he asked to buy the freedom of his wife and children, he barely had $100 to his name. He knew, at that rate, the task could take him decades. Smalls had to think of something new—something drastic.

An unwitting bystander might have mistaken Robert Smalls and his wife Hannah Jones for freed slaves. The couple had met when Robert was 16, working at a hotel where Hannah was employed as a maid. They married, had two children, and lived in a private apartment above a horse stable in Charleston. Each day, Robert walked alone to the docks and wharves of Charleston, eventually finding himself work on the CSS Planter.

But appearances of freedom were an illusion. Smalls and Jones had to give nearly all of their income to his owner. Worse yet, the couple was constantly burdened with worry. Smalls knew that his wife and children could be stripped from his life on his owner’s whim. He knew the only way to keep his family together was to buy them.

Born in 1839 behind John McKee’s house, Smalls had grown up as the family’s household favorite (potentially because McKee, or McKee’s son, was his secret father). Whatever the reason, Smalls did relatively limited housework, was allowed inside his owner’s house, and was permitted to play with the local white children.

Smalls’s mother watched her son being coddled and was afraid he’d grow up without knowing about the horrors of slavery, so when Smalls was 10, she dragged her son into the fields. He picked cotton, rice, and tobacco. He slept on dirt floors. He watched slaves in town be tied to a whipping post and lashed. The experience changed him.

Smalls began to rebel. He protested slavery and started appearing more frequently in jail. Eventually, his mother grew concerned for his safety and asked McKee if Smalls could be sent to Charleston to work. Their owner agreed. It was in Charleston that Smalls would discover the woman who became his wife, as well as a talent for sailing.

By the spring of 1862, Smalls was working aboard the CSS Planter, an old cotton steamer-turned-warship. It was the midst of the Civil War, and Smalls helped steer the boat, plant sea mines, and deliver ammunition and supplies to Confederate outposts along the coast. Whenever Smalls looked out toward sea, he saw a blockade of Union ships bobbing on the horizon.

The captain of the CSS Planter, C.J. Relyea—known for wearing a trademark wide-brimmed straw hat—had a crew comprised of multiple slaves. One day, another enslaved crew member grabbed the captain’s hat while he was away and planted it on Smalls’s head. “Boy, you look just like the captain,” he said.

Smalls looked out at the ocean, past Fort Sumter and toward the fleet of Union ships in the distance.

He had an idea.

Smalls knew he could steal the Planter. He knew the shipping routes. He knew the checkpoints. He knew the codes and signals to get past the forts. And, of course, he knew how to pilot the boat. As the Planter’s wheelman, Smalls was basically the boat’s unofficial captain.

Late on May 13, 1862, the Planter returned to Charleston from a two-week trip. The white crewmembers were supposed to stay aboard after docking, but the Planter was scheduled to begin another long mission the next morning, and the white crew supposedly missed carousing and sleeping on land. They left the boat for a night out on the town, trusting the enslaved crew would take care of the ship.

It was exactly what Smalls had hoped for.

Around midnight, Robert slipped the skipper’s jacket over his shoulders and ordered the other enslaved crewmembers to light the boilers. At 2 a.m., the CSS Planter eased into Charleston Harbor.

Smalls quietly directed the boat to a rendezvous point where he picked up Hannah, his children, and eight other enslaved people (Smalls had warned his family in advance of the possibility that May 13 could be the fateful night). Hannah later told a reporter that, in his words, “The whole party had solemnly agreed in advance that if pursued, and without hope of escape, the ship would be scuttled and sunk; and … they should all take hands, husband and wife, brother and sister, and jump overboard and perish together.” Her husband was more terse. When she asked what would happen if they were caught, Smalls said, “I shall be shot.”

The crew intended to fight to the death. The boat was loaded with 200 rounds of ammunition and five large guns, including a howitzer and a giant pivot gun. If cornered, they’d dynamite the boiler.

Moonlight glinted off the water. Smalls raised the Confederate and Palmetto flags and pointed the boat at the open ocean. As the Planter approached the first checkpoint, Fort Johnson, Smalls began to pray, “Oh Lord, we entrust ourselves into thy hands.” He sounded a signal on the steam whistle and was waved through. The boat slipped deeper into the harbor.

As the boat approached Fort Sumter, Smalls adjusted the captain’s straw hat and leaned out the pilot-house window. He had watched Captain Relyea pass the fort dozens of times before. He had studied his body language. So Smalls stood on the deck, arms crossed, his face obscured by the hat’s brim and the night’s darkness.

At 4:15 a.m., the Planter sounded the steam whistle again. According to a report filed by the Committee on Naval Affairs, “The signal … was blown as coolly as if General Ripley [the commander of Charleston’s defense] was on board.”

The guards at Fort Sumter sounded their signal in return: “All right.”

The Planter successfully passed five Confederate gun batteries. Once outside of Fort Sumter’s cannon range, Smalls lowered the rebel flag and raised a white bed sheet. The Planter aimed for the Union blockade.

Seeing a Confederate ship hurtle in their direction, sailors aboard the union USS Onward panicked. It was dusky, and they couldn’t see the surrender flag.

“Open her ports!” Acting Volunteer Lt. J Frederick Nickels ordered. The crew pointed the No. 3 port gun in the direction of the Planter and was ready to fire when somebody aboard cried, “I see something that looks like a white flag!”

The command to fire was dropped. The group aboard the Planter began to dance and sing. As the Planter reached the blockade, Smalls stepped forward and removed his hat. “Good morning, sir!” he yelled. “I’ve brought you some of the old United States guns, sir!”

Within minutes, the stars and stripes were flapping high from the Planter’s mast. 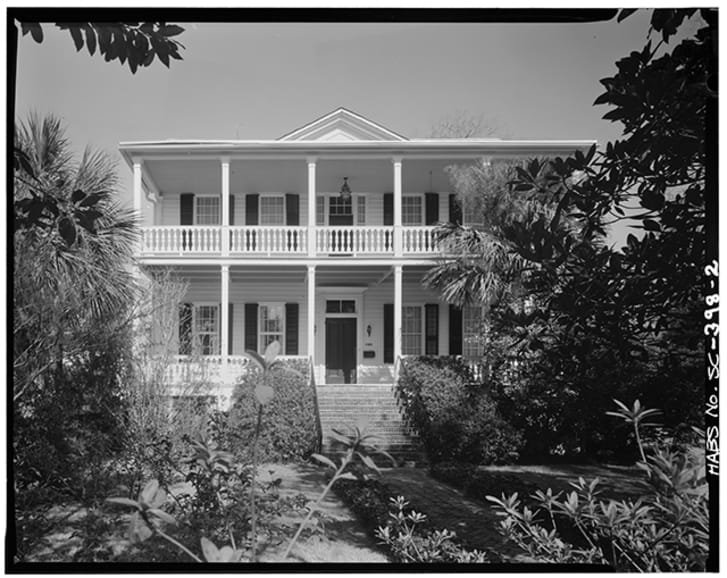 Smalls quickly became a folk hero. “If each one of the Generals in our army had displayed as much coolness and courage as [Smalls] did when he saluted the Rebel flag and steamed past the Rebel fort, by this time the Rebellion would have been among the things that were [past],” The New York Daily Tribune wrote. Navy Admiral S.F. Dupont would callSmalls “superior to any who have come into our lines.”

Meanwhile, in South Carolina, a $4000 bounty was placed on Smalls’s head and Captain Relyea was court-martialed, sentenced to three months in prison for negligence (although this was later overturned). The Confederate brass was dumbstruck. They couldn’t fathom that a crew of slaves was clever enough to outfox their navy. (Unable to give the credit, F.G. Ravenel, a Confederate Aide-de-Camp, believed that “two white men and a white woman” must have conspired to make it happen.)

Smalls didn’t care. He was too busy enjoying the freedom and money that he had long been denied. A few weeks after surrendering the ship, the U.S. Congress awarded Smalls and his crew half of the Planter’s value. Smalls received $1500 and an audience with President Lincoln.

At one meeting with Lincoln, Smalls was joined by Frederick Douglass. The famed abolitionist implored the president to allow African-Americans to join the military—and convinced him that Smalls should lead the cause.

Smalls did. He joined the U.S. Navy, revealing the location of enemy mines, and personally recruited about 5000 African-American soldiers. He joined the USS Planter on missions to the south, including an attack on Fort Sumter. During a battle at Folly Island Creek, South Carolina, the Planter’s white captain abandoned his post in despair. Smalls stepped into the pilot-house and led the ship to safety. For his bravery, he was awarded the rank of Navy Captain.

When he wasn’t fighting battles at sea, Smalls was fighting civil rights battles on land. In December 1864, Smalls was tossed out of an all-white streetcar in Philadelphia. Enraged, he used his budding fame to protest the segregation of public transit. Three years later, the streetcars of Philadelphia were integrated.

After the war, Smalls returned to South Carolina with the money he earned and bought his former owner’s house.

Not one to rest on his laurels, Smalls helped establish a local school board in Beaufort County and one of the first schools for black children in the region. Then he opened a store. In 1868, he ran for—and won—a seat in the South Carolina House of Representatives, then two years later in the state Senate. In 1872, he started a newspaper called The Southern Standard. And in 1874, he ran to become a representative in the U.S. Congress.

He won 80 percent of the vote.

During five nonconsecutive terms, Congressman Smalls pushed for legislation to desegregate the military and restaurants in Washington D.C. His work successfully led to the opening of the famous South Carolina marine base at Parris Island.

All that time, Smalls kept his mind and heart open. Legend has it that when his former owner’s wife was stricken with dementia, she’d often wander into his house, believing it was still hers. Rather than send her packing, Smalls invited her inside.